My favorite fact to spout about paracord is that it's been used in space. Not only inside of a spaceship, mind you, but in cold, dark, oxygen-free outer space. While the paracord that NASA used was not supplied by Paracord Planet, paracord has not only been into space—it saved a $2-billion space telescope. (okay, that's maybe just a small exaggeration . . . )

Nearly everyone has heard of the Hubble Space Telescope. Over the years, it has sent back priceless photos of our universe that have given humanity clues as to what really lies "out there".

What people might not know is that the Hubble is never more than 500 miles away from earth. It often gets confused with the Voyager 1, which is now over 13 billion miles away, outside of our galaxy in interstellar space.

Since it's launch in 1990, the Hubble has been maintained and upgraded through 5 servicing missions. In these 30 years of its operation, technology has advanced significantly. To keep the Hubble functioning at its best, it's has been repaired and upgraded with new sensors and equipment that were not available when it was designed back in the 70's.

NASA designed the Hubble to be updated in this way. Most of its components are modular and can be detatched with a specially designed drill. In order to service the Hubble satalite, a team of astronauts would launch in a space shuttle, match the orbit of the Hubble, and dock it on top of their cargo bay. Then, through a series of space walks, they could replace both large and small hardware units. That's what's happening in the image above.

You can find out more about the Hubble on NASA's website.

Servicing Mission 2 is of special interest to us at Paracord Planet. During this 10-day mission, astronauts Gregory Harbaugh, Steven Hawley, Mark Lee, and Joseph Tanner installed instruments that would enable the Hubble to see near-infrared light, better search for black holes, store more data, and position itself more accurately. 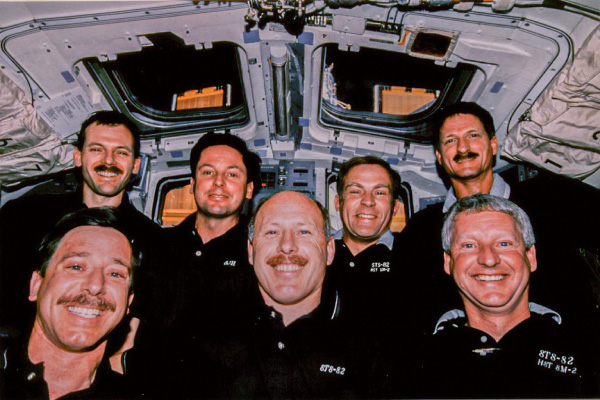 While the astronauts were out on their space walks installing these instrument upgrades, they found gaping holes in the protective insulation of the Hubble. They hadn't anticipated this particular problem, but they did come prepared for general unexpected hiccups.

Back on Earth, Mission Control set to work formulating a solution. Similar to the scene in the movie Apollo 13, they determined what emergency supplies the astronauts had with them and began mocking it up on their model.

Among the gear they had with them on the shuttle was some Teflon-coated thermal blanketing and 35ft. of nylon paracord. Their first mock-up used 37 ft.—Just two feet more than was available.

"The solution was decidedly not high-tech," astronaut trainer Mark Newman said. In the end, he instructed the team to use a knot he had learned while vacationing at his brother-in-law's beach cottage (assumedly, the taut line hitch). Along with some other miscellaneous supplies like zip ties and wire, the astronauts patched the holes in the protective outer covering.

Imagine trying to teach someone how to tie a knot 500 miles away in 1997. It makes my job of developing YouTube tutorials look easy by comparison! 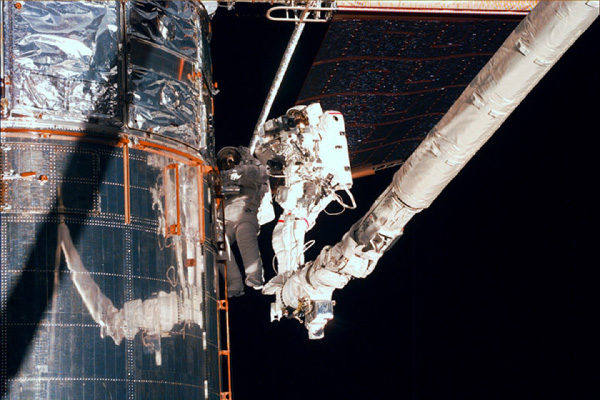 If they hadn't elected to do these extra repairs, it would have left sensitive (as well as very expensive) equipment exposed to extreme heat from the sun and minute debris from space.

So that's how paracord (pretty much) saved the Hubble Space Telescope. It's no wonder that paracord has a reputation of being extremely durable and insanely versatile. There's no end to the things you can fix with paracord.

Thanks to these astronauts, we can now truthfully say that paracord is out of this world! (Roll your eyes, it's okay.)

Perhaps more importantly, this story illustrates how important it is to be prepared. Rope is an extremely versatile tool, and knots are an extrememly applicable skill. You will probably never find yourself in outer space, needing to use just the right knot. But, you might find yourself on the side of the road, with a matress that doesn't want to stay in the bed of your pickup. The same principles apply!

The lesson? Always keep paracord in your spaceship . . . er, vehicle.

Hope you guys enjoyed this one. Below are some cool links and articles we used to construct this story.