Where It All Started

If you don't know what paracord is, read this first Paracord: What Is It? The short story is this: Paracord was first manufactured for use as American parachute lines back in World War 2. Soldiers began salvaging these parachute lines when dropping into enemy territory and using them for all kinds of emergency fixes in the field. Later, paracord became a standard military supply that was routinely shipped overseas with deployed soldiers—even after paracord fell out of use as parachute suspension lines.

My best estimate is that paracord bracelets first showed up in 2004. I had previously been under the impression that the trend started back in Vietnam. However, I have found no evidence of paracord being made into bracelets before the 21st Century. Nearly every story I've read so far confirms this estimate. I do not have any clues as to WHO first person to make a paracord bracelet was.

Since the first publishing of this article, I have heard one unconfirmed story of soldiers tying paracord bracelets back in the 70's in the Rhodesian Bush War.

This picture was taken from a PDF document dated 2004.

I've heard many stories of deployed soldiers receiving paracord bracelets as gifts from someone in their platoon. To them, wearing a paracord bracelet meant they had each other's back in the face of danger—that they were going to get each other back home.

For some soldiers, it became a kind of good luck charm—If their paracord bracelet was what kept them safe thus far, they better not jinx it by taking it off. For others, it was a symbol of their self-sufficiency. It demonstrated their ability to take care of themselves. And to those who came home without a friend or battle brother, wearing a paracord bracelet was a way to recognize the sacrifice and mourn their loss. 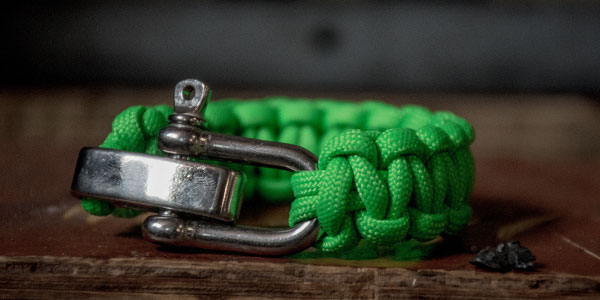 Around 2007, military veterans pickt up the idea of making paracord bracelets back home. They, who had used paracord while deployed, turned their knowledge of knots into a way to pass the time, keep their hands busy, and adjust back to civilian life. For some of them, it also turned into a side income. A few of these veterans became successful and built entire businesses around their craft.

During this time, paracord's reputation spread. Stories abounded of how it had got soldiers out of jams.The survivalist and prepper communities took note. There, it was heralded as the "ultimate survival tool". They boasted that it could be used for everything from trapping wild game to flossing your teeth. The lists went on and on. Some of them were realistic, some not so much.

The bracelets sold by veterans became so popular that they were recognised not only as a symbol for the toughness of the military, but also as a way to show solidarity with any number of other causes. Like breast cancer awareness or mourning with the families of policemen and policewomen who had died in the line of duty.

This increase in demand for paracord bracelets created an new market for the companies who manufactured paracord for the military. Soon after, paracord could be found in outdoor equipment stores and online as a rugged crafting material and backpacking gear item.

Paracord also became available in many more colors and varieties than before. Paracord Planet now sells hundreds of colors of paracord.

This popularity also attracted rope manufacturers around the world, who began manufacturing similar ropes out of other materials and calling them paracord. There is no regulation on the term "paracord", so the buyer has to be smart about where they buy it from—especially if they are using it in critical load bearing situations.

So, to directly answer the question of "What does a paracord bracelet mean?": It means a lot of things to a lot of different people, but originally it represented the toughness and perseverance of the American military. As the use of paracord continues to expand, it's interesting to look back on the history of the paracord bracelet and appreciate its origins.

If you have anything to add to the history of paracord and paracord bracelets, please tell us! I know we have a lot of veterans in our audience who would be more qualified to answer this question than I am. Thanks for reading!

Where To Buy Paracord
Do I Need Mil-Spec Paracord?
Paracord: What Is It?
Why Are There So Many Paracord Sizes?
Paracord Strengths, Sizes, and Types