Turk's head knots range from very simple to insanely complex. If you haven't yet tied one of these intricate knots, now is your chance to learn a little about them. They're not as scary as they look.

Turk's head knots have been around in some form for the last 2,000 years—possibly much longer. It's difficult to pinpoint exactly where the first one came from, but depictions of these infinite woven knots started showing up in Roman mosaics around the first century.

If terms like "lead", "bight", "pass", etc. make you want to run the other way, hold on a minute. These words merely designate the size of the Turk's head. There are so many varieties that the numbers are necessary to describe the exact knot you are tying.

Leads—the number of cord groups in a cross section of the knot. Different from number of times a weave is "doubled"

Doubling—When you complete your Turk's head knot, you end the knot right where you started. If you were to follow alongside your cord all the way through the knot a second time, the knot would be "doubled."

I am not qualified to talk much on the mathematical principles that make the Turk's head knot possible, so I'll keep it pretty basic. It's possible that Euclid came up with his algorithm by working with knots similar to Turk's heads. Also, the Emblem of the school of Leonardo da Vinci (rendered by Dürer) features a highly complicated Turk's head style knot. I'm sure the conspiracy theorists will have a fun time deciphering what it all means!

Without going deep into the math, I found the following facts interesting:

A Turk's head is impossible to tie when 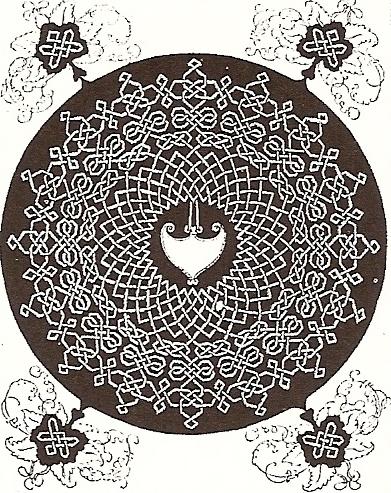 Simple Turk's heads can be tied around your fingers, your wrist, or a handle. The more complex varieties need to be made with a kind of jig. You can buy premade Turk's head jigs, but many people opt to make their own to suit their specific needs. This goes for both cylindrical Turk's heads and flat ones.

A cylindrical Turk's head jig is usually made from a section of wooden dowel or PVC pipe. Pins or nails are then embedded around the cylinder to keep the cord in place until the knot takes shape. Complex Turk's heads have too many cords to hold onto with only your hands.

A second tool that is useful for making Turk's heads is a fid. You can operate without one, but they sure speed things up.

A true Turk's head is made of a single piece of paracord woven around and around in a circle. Though it may look like a braid, the way it is made is much different.

A Turk's head ring or bracelet is a good place to start. Try your hand at making a bracelet with this 3 lead, 10 bight bracelet video.

After you get the basics down, you can move on to other kinds of Turk's heads such as rings, wraps, and mats.

Things you can make with a Turk's head knot:

Now you're out of excuses! Go make a Turk's head.