Perhaps you can relate to this:

I often find myself needing a knot to bind something. Sometimes it's to bundle a bunch of items together, other times it's to keep something from falling apart.

Most of the time, my solution looks like this: A bunch of overhand knots or square knots on top of each other. 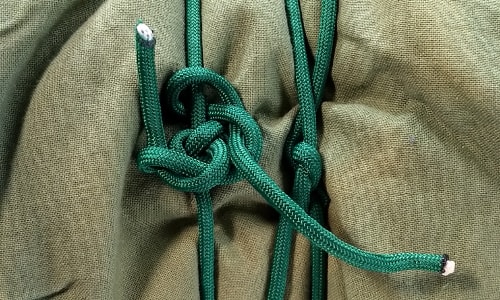 Shamefully, I fall into the habit of "Don't know the knot? Tie a lot!" This doesn't really accomplish the goal. Instead of a simple knot that does its job well, I have a knot that's impossible to untie and won't stay tight.

I recently discovered the "Butcher's Knot". It fills a glaring gap in my knot knowledge. In essence, it's a figure 8 slip knot tied off with a half hitch, but the way it is tied allows for it be tied first and then cut off the spool afterward

In the north, we have to cover our air conditioner units with a cover so that they don't rust out after they get buried in snow. Being a responsible home owner, I bought the cheapest AC cover. It was way too big for my unit, and it blew away the first time the wind came up.

I knew a snowstorm was on its way, so I tied a tarp around the AC unit using paracord. It gave me an opportunity to try out my new knot knowledge.

Disclaimer: The image below is a horrible example of a correctly tied butcher's knot. If tied correctly, it will not look like this! Take a look at the title image instead. 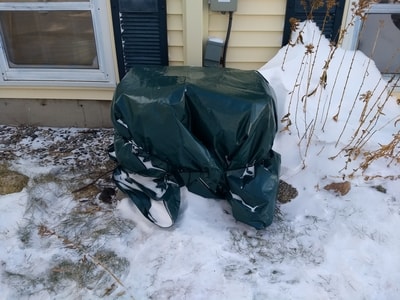 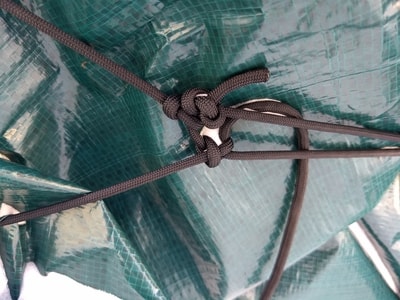 My butcher knots look pretty messy, but I was doing it from memory and I could barely feel my fingers. Needs some practice, but the AC cover stayed on through two blizzards in December. I'm going to call that a success.

Learn how to make it yourself: Butcher Knot Tutorial

What do you think? Does this do a good job of being the "go-to" knot for simple household binding? Maybe you know of a better one. Let me know in the comments.