Paracord is good for a lot of things: camping, crafting, drone flying, sculping… Legend has it, paracord can even be used to floss your teeth in a pinch, though this is yet untested by me.

There are, however, a few things you should NOT do with paracord. Read my list and see if you have anything else to add.

1. Never Use Paracord for Climbing (Unless You Have No Choice)

I used to think that paracord, because it was rated for 550 lbs, could be used for climbing or rappelling. This is not the case! If you were to use 550 cord as fall protection, it would snap under the inertia of your fall! Even in an emergency, certain precautions would have to be made in order to make paracord a viable tool for getting you off the face of a cliff.

2. Never Wrap Paracord around Your Hand for Leverage

Someone that I know did this. Months later, he still has a swollen hand. It could have been a lot worse. Paracord can be used as a friction saw after all. It's small diameter means that, if enough force is applied, it can cut through soft material, like skin.

Have you ever noticed that once you learn a skill, you notice more when other people do it poorly? Ever since I learned the "right" way to roll up an audio cable (or rope—it works for both) it drives me crazy when I see a vacuum cord or rope that has been left in a pile or rolled into a kinked mess.

Now, I know that some of you are going to do this just because I said not too, but burning paracord is a bad idea. While melting the ends is common practice, it is important to not burn it. Burning paracord releases some pretty awful-smelling smoke that I can only assume is harmful to your health. Burning it in a campfire should be avoided for the same reasons.

5. Never Stand in the Way if Paracord Snaps

Paracord is designed to be shock absorbing, which means that it stretches. Stretchy ropes can have an incredible amount of recoil when they snap. Tug-of-war battles with nylon ropes have led to the loss of fingers. In In one extreme tug-of-war, two men each lost an arm from the recoil of a 1 1/2" thick nylon rope that had been subjected to over 80,000 lbs of force!! I would not suggest looking up pictures of that one… (snopes.com) While paracord is not liable to cause THAT kind of damage, it could easily break skin or take out an eye if someone is being careless. Below is how rope safety is taught for military and loading dock personnel. 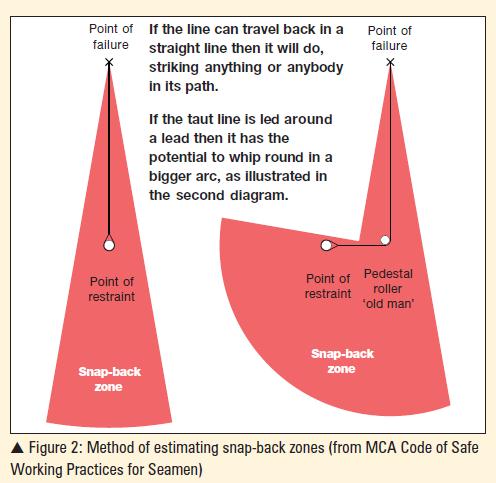 Picture taken from The Nautical Institute.

6. Never Leave Paracord on the Ground

While paracord is a good, cheap utility rope—it is not biodegradable! Paracord is made of nylon, which is a type of plastic. Leaving it on the ground when you are camping is just as bad as leaving a plastic bottle or straw or anything else that is not going to decompose. Be considerate to the land and to future campers. Use twine if you want a disposable camping rope.

The only helpful tool is the one you carry. I found when I started carrying paracord with me, I began to find all sorts of uses for it. I've learned the hard way that times I don't carry paracord are the times I end up needing it. The best solution is to carry some whenever you practically can. More about that in these posts: Paracord Hacks for Moving Day, Times You Should Carry Paracord But Probably Won't.

What do you think? Have you done any of the things on this list? Maybe you have other bad ideas for paracord. Let us know by commenting.