Happy St. Patrick's Day! Do you know why we celebrate the Patron Saint of Ireland? Here's a quick history for you -

"Saint Patrick, who lived during the fifth century, is the patron saint and national apostle of Ireland. Born in Roman Britain, he was kidnapped and brought to Ireland as a slave at the age of 16. He later escaped, but returned to Ireland and was credited with bringing Christianity to its people. In the centuries following Patrick’s death (believed to have been on March 17, 461), the mythology surrounding his life became ever more ingrained in the Irish culture: Perhaps the most well known legend is that he explained the Holy Trinity (Father, Son and Holy Spirit) using the three leaves of a native Irish clover, the shamrock." -- history.com for the rest of article, click here.

Since this holiday is largely celebrated with green beer, eating reubens, and going to parades it's important to dress the part. If you need to find some ideas to gear up in green, check out last week's blog on Showing your Irish Spirit.

Keep your beer cold in a paracord green coozie. It can be used year-round! Here is a blog I wrote a while ago about making my coozie. It includes where I got the tutorial from, tips, and my frustrations. It's a great project that I still use! 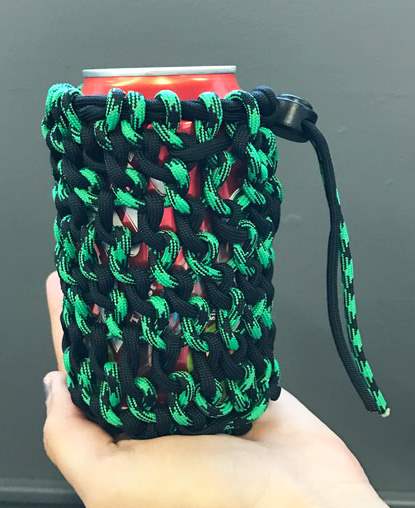 A paracord headband is a great accessory to make so you don't get pinched if you happen to forget to wear green! They can be done with many different weaves (fishtail and cobra both work great) and shock or elastic cord as the base.

Now, I know four leaf clovers and shamrocks are different, but the Irish spirit of the knot is the same and can be easily turned into a necklace or bracelet to show your green pride.

These are 3 paracord crafts to shamROCK your St. Patrick's Day! Enjoy and be safe!